Every Thursday on the blog will be “trackback thursday.” Here I’ll share something interesting/fun/ridiculous/who-knew-it piece of American history. Being a somewhat history nerd myself, and an author of historical fiction, it seemed like something fun to do.

This established the formal procedures for transforming territories into states. So, instead of massive blocks that first made up the Midwest and West, the territories would eventually shrink into smaller states. The Northwest Territory that it created stretched from the Ohio River to the Great Lakes (South to North), and the Appalachian Mountains to, well, pretty much the middle of current Minnesota.

This eventually lead to the establishment of around six states, which were to be considered equal with the original 13. Though it technically didn’t include ALL of some of these states (see above: half of Minnesota), over time they eventually came about because of it.

Considered one of the most important acts of the Continental Congress at the time, it showed that there would be westward expansion and creation of new states rather than existing states ruling and expanding their existing boarders.

Basically, Congress didn’t want anyone getting greedy and ruining the “good thing they had going.”

So, what states eventually came out of this?

I knew you were dying to know. 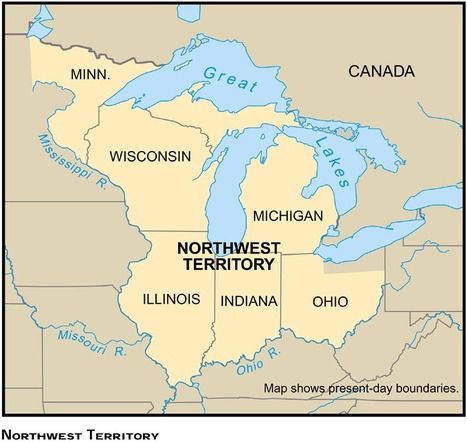 With all of this, the Ordinance included a Bill of Rights that promised: freedom of religion, right to trial by jury, public education (including a university!), and a ban on slavery. This will be important later (see: Civil War).

Check back next Thursday for more #trackbackthursday– the new #tbt.