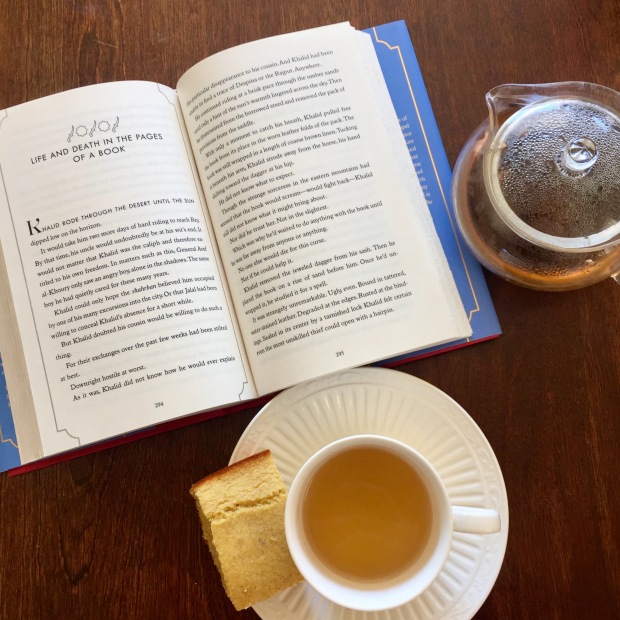 The Rose & The Dagger is Renne Ahdieh sequel to The Wrath & The Dawn. I went through this book as quickly as I did the first, though I must admit there were slower places in this one, where the first one kept me intrigued and desiring more and more.

Not saying this one didn’t do that, juuuust saying that there were a few places that we were in character’s heads for a little too long for my taste. More action would have been nice to break it up a bit, though I understand why the thoughts were necessary.

Here’s what Goodreads has to say about it:

In a land on the brink of war, Shahrzad is forced from the arms of her beloved husband, the Caliph of Khorasan. She once thought Khalid a monster—a merciless killer of wives, responsible for immeasurable heartache and pain—but as she unraveled his secrets, she found instead an extraordinary man and a love she could not deny. Still, a curse threatens to keep Shazi and Khalid apart forever.

Now she’s reunited with her family, who have found refuge in the desert, where a deadly force is gathering against Khalid—a force set on destroying his empire and commanded by Shazi’s spurned childhood sweetheart. Trapped between loyalties to those she loves, the only thing Shazi can do is act. Using the burgeoning magic within her as a guide, she strikes out on her own to end both this terrible curse and the brewing war once and for all. But to do it, she must evade enemies of her own to stay alive.

The saga that began with The Wrath and the Dawn takes its final turn as Shahrzad risks everything to find her way back to her one true love again.

I loved the new characters we got to see in this book, as well as the old. Being introduced to Shazi’s sister was a definite plus for me, since I have two sisters of my own and understood the struggle Shazi had with that relationship and the secrets she had to protect.

However, with new characters meant that I was taken away from my two favorites for longer periods. While it was necessary to the story, and it helped tie some loose ends, I thought that there could be a little more between Shazi and Khalid to help bring their relationship even more to life in this second book.

Over all, Ahdieh did her story justice, and I was sucked in the second book as quickly as I was with the first. I would recommend these books to anyone who loves One Thousand and One Nights. I’m really looking forward to Ahdieh’s next project, which is said to focus around the legend of Mulan.