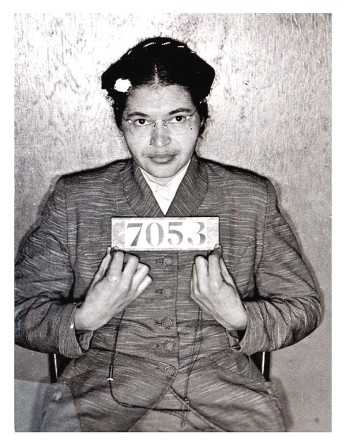 On December 1, 1955, Rosa Parks was arrested in Montgomery, Alabama for refusing to give up her seat to a white man and move to the back section of the bus.

Because she sat down and refused to give up her seat to a white passenger, Parks was arrested for disobeying an Alabama law requiring blacks to relinquish seats to whites when the bus was full. African Americans were also supposed to sit at the back of the bus, which Parks refused to do.

Her arrest sparked a 381-day boycott, by African Americans and others involved in the Civil Rights Movement, of the Montgomery bus system. It also led to a 1956 Supreme Court decision banning segregation on public transportation.

Parks and her husband were active in the Montgomery Chapter of the National Association for the Advancement of Colored People (NAACP). While working as a tailor’s assistant, Mrs. Parks served as chapter secretary. Later, she advised the NAACP Youth Council. Denied the right to vote on at least two occasions because of her race, Rosa Parks also worked with the Voters League to prepare blacks to register to vote.

Rosa Parks became known as the “Mother of the Civil Rights Movement,” honored with awards around the world.