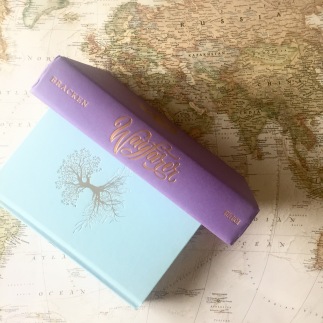 After a VERY LONG YEAR of waiting, the sequel to Alexandra Bracken‘s Passenger was finally released earlier this month, and I had to wait two whole days after it came out to receive my copy in the mail.

I could have gone to the bookstore, but seeing as how I ordered it the day before it came out, I was responsible. And I waited.

Once I got the book, I was semi-thankful that I was under the weather, because I finished it in approximately 32 hours– and that was only because I fell asleep and dropped the book on my face. Otherwise it would have been shorter.

While I thoroughly enjoyed the book, I will admit it didn’t wrap me up in the world of time travel and history as much as the first one did. Perhaps it’s because the two characters we came to love together so much, Etta and Nicholas, weren’t together for almost the entire book… or perhaps it was something else I can’t put my finger on. But before I go into more (without spoilers, I promise), here’s what Goodreads has to say:

All Etta Spencer wanted was to make her violin debut when she was thrust into a treacherous world where the struggle for power could alter history. After losing the one thing that would have allowed her to protect the Timeline, and the one person worth fighting for, Etta awakens alone in an unknown place and time, exposed to the threat of the two groups who would rather see her dead than succeed. When help arrives, it comes from the last person Etta ever expected—Julian Ironwood, the Grand Master’s heir who has long been presumed dead, and whose dangerous alliance with a man from Etta’s past could put them both at risk.

Meanwhile, Nicholas and Sophia are racing through time in order to locate Etta and the missing astrolabe with Ironwood travelers hot on their trail. They cross paths with a mercenary-for-hire, a cheeky girl named Li Min who quickly develops a flirtation with Sophia. But as the three of them attempt to evade their pursuers, Nicholas soon realizes that one of his companions may have ulterior motives.

As Etta and Nicholas fight to make their way back to one another, from Imperial Russia to the Vatican catacombs, time is rapidly shifting and changing into something unrecognizable… and might just run out on both of them.

I did absolutely love the secondary characters in the book. I loved getting to know Etta’s father, Julian, Li Min, and more layers of Sophia, Nicholas, and Etta. But, like I said earlier, the fact that the fight for Nicholas and Etta to be together took almost the ENTIRE book… I found myself desperately wanting to skip ahead to the part when they FINALLY REUNITED. This, I’m sure, is the romantic in me.

Since the first book took us on a crazy adventure that brought these two lovebirds together, I hoped the second would bring them together at least halfway through so we could experience more of their balance in the midst of the craziness. This wasn’t the case. However, in a few months I’m hoping to reread both the books in succession and perhaps I won’t feel as torn about my feelings for Wayfarer then.

Overall, this book was beautiful. The places we got to go and the emotions I felt through all of the characters wrapped it up in a wonderful end as a sequel. I especially loved all the toying with history and the potential repercussions of what that could mean.

If you loved Passenger, I would still highly recommend picking up the sequel. I’d love to hear your thoughts on it!